Deconstruction of justice in Poland? – The Centre for East European and International Studies 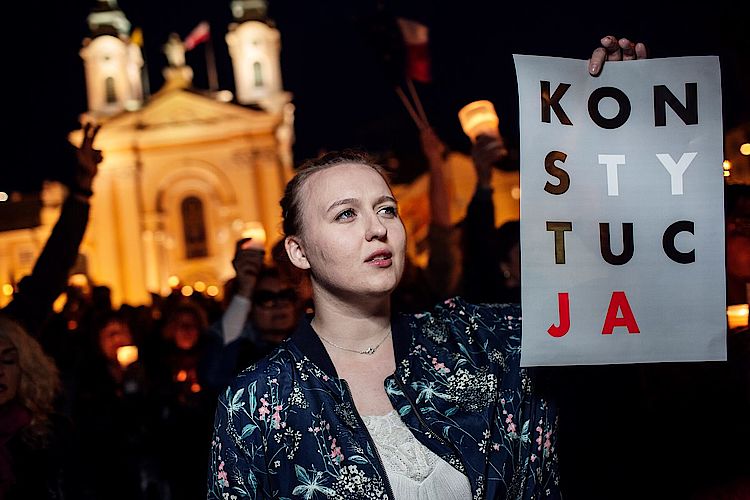 On 20 December 2017, the European Commission triggered Article 7 of the Treaty on European Union (TEU) and also initiated an infringement procedure against Poland before the Court of Justice of the European Union in response to the country’s judicial reform. A threat to the rule of law in Poland has also been identified by the Venice Commission in a total of five opinions.

The Act on the Organisation of Ordinary Courts includes provisions on the election of the court presidents at ordinary, administrative and military courts. Previously, nomination – formally a matter for the Minister of Justice – required the involvement of the organs of judicial self-government and the National Council of the Judiciary. Now, no opinion from the organs of judicial self-government is required, and the National Council’s opinion may be disregarded. The Minister of Justice has also been granted the power to determine the internal organisation of the courts. This applies, for example, to the principles governing the allocation of individual cases through the drawing of lots, the composition of panels, and the assignment of cases according to the roster. Furthermore, with the Act’s entry into force, female judges who had reached the age of 60 and male judges aged 65 and above are automatically retired. The Minister of Justice has discretionary powers to extend their service upon request. This is regarded as a violation of the principles of the irremovability of judges and the separation of powers. The Minister of Justice may also remove all the court presidents from office within six months, a power which he has already exercised.

Possible government influence over the National Council of the Judiciary

The National Council of the Judicary is a body set up during Poland’s transition in order to strengthen judicial independence. In accordance with Article 186 of the Constitution, its task is to safeguard the independence of the courts and judges. Article 179 of the Constitution stipulates that judges are to be appointed by the President of the Republic of Poland on the motion of the National Council of the Judiciary. The National Council of the Judiciary has 25 members, who are drawn from the executive, legislature and judiciary; 15 are of them are judges (Article 187 of the Constitution) and were previously chosen by the organs of judicial self-government. Under the new Act, however, the 15 judicial members will be elected by the Sejm (the lower house of Parliament). A judicial candidate may be nominated either by a group of 2000 citizens or by 25 fellow judges. Each parliamentary group in the Sejm then chooses nine candidates from among the nominations. A Sejm commission then compiles a list of 15 candidates, which must include at least one candidate for each parliamentary group. The 15 judicial members are elected, in the first round, with a majority of three fifths of the votes in the Sejm, provided that at least half the Members are present. If a three-fifths majority is not reached, candidates may be elected by a simple majority of votes in the second round, again with at least half the Members present. This procedure means that the National Council of the Judiciary is subject to the influence of the ruling party. Under transitional provisions, the terms of office of the members of the old National Council will be terminated one day before the start of the terms of office of the newly elected Council and in any event within 90 days of the amending Act’s entry into force. What this means, in practice, is that the National Council of the Judiciary will be dissolved in 2018 and its composition can then determined, to a large extent, by the current ruling party. In the meantime, the election procedure has already been initiated.

Interference in the irremovability of judges

The Supreme Court, under the old rules, consisted of a Civil Chamber, a Criminal Chamber, a Labour, Social Security and Public Affairs Chamber, and a Military Chamber. Under the new arrangements, the Civil and Criminal Chambers are retained but the Military Chamber is abolished. Public Affairs (which includes election monitoring) has been separated off from the Labour and Social Security Chamber and integrated into a new Extraordinary Control and Public Affairs Chamber. The new rules expressly state that the Labour and Social Security Chamber is to be dissolved and new appointments made. In addition, a new Disciplinary Chamber has been created, and the minimum number of judges at the Supreme Court has been set at 120. The new legislation also states that the current First President of the Supreme Court may only hold office until retirement age. The new Disciplinary Chamber has two departments and enjoys more organisational independence than the other Chambers. The new provisions on retirement give serious cause for concern on constitutional grounds, not least because they also apply to judges who were appointed under the old system. Under the new rules, the retirement age for Supreme Court judges is lowered from 70 to 65 for men and to 60 for women, although women only take retirement at 60 if they so request. Upon reaching the age of 65, judges, whether male or female, are now automatically retired by law, unless they apply to the President of the Republic for an extension of service. The President may  consult the National Council of the Judiciary on the matter, but is not obliged to do so.  The extension is initially granted for three years and may be applied for twice. In reaching a decision on the application, the President exercises his discretionary powers. These provisions thus undermine the principle that judges are not removable (Article 180, paragraph 1 of the Constitution).

In 2017, according to press reports, there were 93 posts for Supreme Court judges, 84 of which were filled. Around 40 per cent of Supreme Court judges are now over 65 years of age. Furthermore, according to the law, the judges of the dissolved Military Chamber are also being retired. What’s more, in order to bring the numbers up to the minimum 120, 36 new posts for judges will have to be created, meaning that in total, at least 69 posts – more than 50 per cent of Supreme Court positions – may well have to be filled. New Supreme Court judges are appointed by the President of the Republic on the motion of the National Council of the Judiciary. This mass recruitment drive not only poses risks to judicial independence; it also has the potential to undermine the functioning of the Supreme Court. The incumbent First President of the Supreme Court has herself already reached 65 years of age and would therefore be required to apply for an extension of service. This situation also violates the Constitution, as Article 183 states that the First President of the Supreme Court is appointed for a six-year term. Under normal circumstances, the incumbent First President’s term of office would not end until 2020.

Poland has come a long way from telephone justice under Communism to the genuine judicial independence that is now taken for granted as an integral element of judges’ professional ethics. Each of the new judicial reform laws intrinsically violates the Constitution by undermining judicial independence and the separation of powers. Through the interaction between the individual items of legislation, however, the risk to the rule of law increases exponentially. The fact that the presidents of ordinary courts are already being appointed by the Minister of Justice and that in 2018, the appointment of the majority of members of the National Council of the Judiciary and the majority of Supreme Court Judges could well be determined to a large extent by the ruling party, opens the way for interference by the executive in jurisprudence. In a worst-case scenario, the government could even overturn judicial decisions that do not go its way. The Constitutional Court, which is already subject to the influence of the ruling party, does not provide a sufficient guarantee that the Constitution will be upheld. For citizens, this would mean that there would no longer be any effective judicial protection of their legal and constitutional rights, which would thus be eroded.

Tina de Vries is a Senior Research Fellow at IOR in Munich and specialises in Polish law.